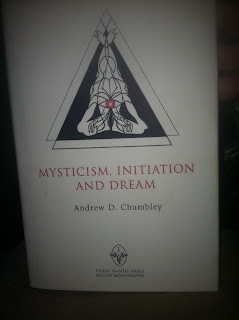 "Dreams are journeys, explorations of the interior infinite, starry heavens within.  Dark mysteries, exquisite and dreadful, await penetration.  Going to sleep is a new awakening..." ~Siegel, 1980


Most of my experience with Chumbley's writing has been his more veiled works, the ritual poetry of Azoetia, and the mystic poetry of Qutub.  When I first picked up these volumes, it was gibberish.  I read them and read them and got nothing out of them  I decided they were fine for Cultus Sabbati but meaningless to those not initiated in the tradition.  I  put them aside and went to other books.  A few years later, with more experience with several streams and more knowledge, I picked them back up, and very little didn't make perfect sense to me.  I had just been missing a few Keys the first time around.  But, Keys or no Keys, understanding or no understanding, Azoetia and Qutub are completely different beasts from Chumbley's essays that are found in Mysticism: Initiation and Dream.

For those unfamiliar with Chumbley, he was born in 1967 in England, and only lived to be 37.  He was an initiate into a form of Essex and Welsh witchcraft, and was the Magister of Cultus Sabbati, a collection of several traditions that came together for mutual benefit, and was involved in several non-witchcraft traditions.  He was pursuing a doctorate in religion focusing on dream incubation rituals at the time of his death.  Only a small portion of his writings have been publicly published.

This book, Mysticism: Initiation and Dream, is a set of some of his undergraduate essays that laid the foundation for his doctorate work, and reveals a fair amount about his practice that can be applied to any esoteric tradition regardless of origin.  It is masterfully written, in scholastic language, not in the symbolic and veiled language of Azoetia and Qutub.  While some words and terms might be difficult for some readers, the grammar and feel is very accessible to most readers.  It was worth the money and the time to read it.

The book is published by Three Hands Press in the UK, and is the first of three such volumes of Chumbley's essays on the subject(s).  I purchased the book through J.D. Holmes, a North American distributer for Three Hands Press.  He was a pleasure to order from, communicated personally with me about the order, and was quick to answer my questions.  I purchased it for $56.95, plus shipping, which is very reasonable for books by Chumbley, though a bit expensive for a book only 51 pages long.  But those 51 pages were packed with far more than you've get from most books five times its length and it was well worth the money.

The book consists of five essays, the fifth being the conclusion based on the other four.  These are, The Universality of the Dream, Preliminary Thoughts and Methodology, Dream Reification, Oneiric Rarefaction, and Conclusion.  At the end is a bibliography of cited works, containing a four and a half page list of fifty-four books he cited in the essays.  These books are from very diverse sources, in several languages, and about traditions and writings in many parts of the world.  They would be a joy to collect and read themselves.  This being a scholarly work written in a university setting, the large number of reputable sources isn't much of a surprise, but compared to many occult and witchcraft books, that many sources for 36 pages of text is impressive.

"We all dream; it is a mystery in which all humankind participates.  I realize this is an assumption, but it is one that I have no qualms in asserting as fact: the dream is an experiential universal for humanity." ~Andrew D. Chumbley, Mysticism: Initiation and Dream, Pg. 11


In the first essay, The Universality of the Dream, the Particularity of Interpretation, Chumbley looks at exactly that, that dreams are common to all people, so the mysteries they impart aren't limited to a group or tradition, they are available to all people.  He proposes that dreams possess secrets that spawn all religions and traditions.  This short essay is an introduction to the subject of the book.

"We might say that the dream tranforms the dreamer; that it possesses the ability to 'initiate', to bestow new meaning, to motivate new beginnings (Latin: initium - beginning), to permit our entrance (literally 'en-trance'; Latin: inire init - to go in) to new orders of relation between ourselves and the 'other'." ~Andrew D. Chumbley, Mysticism: Initiation and Dream, Pg. 13


In the second essay, Considerations: Preliminary Thoughts and Methodology, Chumbley discusses what mysticism and initiation are, and how they relate to various ancient dream accounts.  The essay is basically defining terms and creating a framework for discussion in the later chapters.

"'Dream-books' are collations of dreams and their interpretations.  It has been asserted by Peter Lambourn Wilson (in his seminal study of Sufic and Taoist initiatic dreaming entitled 'Shower of Stars", 1996) that 'the dream-book may be the most ancient unbroken continuous literary genre on Earth'.  Indeed, Wilson goes on to say that certain dream interpretations are common to interpreters as historically distinct as Artemidorus (second century AD.), Ibn Sirin (33 A.H.), and Marie Laveau (a nineteenth-century New Orleans Voodooist)." ~Andrew D. Chumbley, Mysticism: Initiation and Dream, Pg. 23-24


In the third essay, Dream-reification: The Initiatic Dream as Author, Symbologist, Composer and Prophet, Chumbley looks at eight dream-books from the last 3000 years several continents and compares and discusses them.  Basically, a dream-book is where dreams are recorded, then compared with events following them to find patterns and meanings.  The heart of the discussion in my opinion is dream informs belief, practice, and ritual, not the other way around, that religions and traditions are born out of dreams and dream analysis and interpretation.

"In a sense we might symbolize the process of oneriric spiritualisation as a 'siderealisation' - a translation of the flesh to the stars - back to the domain of the Gudean goddess, back to the domain of the primordial smaragdine book.  Such a symbolism seems apt indeed if we consider briefly the role of 'stars' in esoteric dream praxis." ~Andrew D. Chumbley, Mysticism: Initiation and Dream, Pg. 40


In the fourth essay, Oneiric Rarefaction: The Way of Ascent, Chumbley discusses the use of star meditations, and dream rooms for initiating a common dream or type of dream.  He discusses dream-incubation, the process of encouraging those common dreams to form, but within traditions and for the traditionless, dreams as teachers and initiators.  Basically, from passive dreaming, letting the dream inform, and the formation of religion, belief, and practice, this chapter discusses active dreaming, what some call lucid dreaming, the tradition or practitioner calling forth the dream.

In the Conclusion, Chumbley apologizes for the shortcomings in the essays, then summarizes them with a brief discussion of reification (descent, the bringing into existence from a dream), and rarefaction (ascent, the taking of the physical and translating it into dream) as the dual action of the dreamer.

My summaries above are very brief and don't give any of the meat or conclusions, just a taste of the subject matter. This book is one I'd recommend above most others and is well worth the expense and time.  May those needing it be able to obtain a copy.  I highly recommend it.

Muninn's Kiss
Muninn was one of Odin's ravens. The other was Huginn. Muninn is memory, which is Chokmah, Wisdom, and the past; Huginn is thought, which is Binah, Understanding, and the future. Where we need to live is in Da'at, the Knowing, the present, the moment, the balance between Muninn and Huginn, between Chokmah and Binah, between Wisdom and Understanding, between Kether and Malkhuth, between the Crown and the World. That is what this journal is about. It is a mystic journey to find our way across the Abyss to truly know the ineffable, unknowable God.